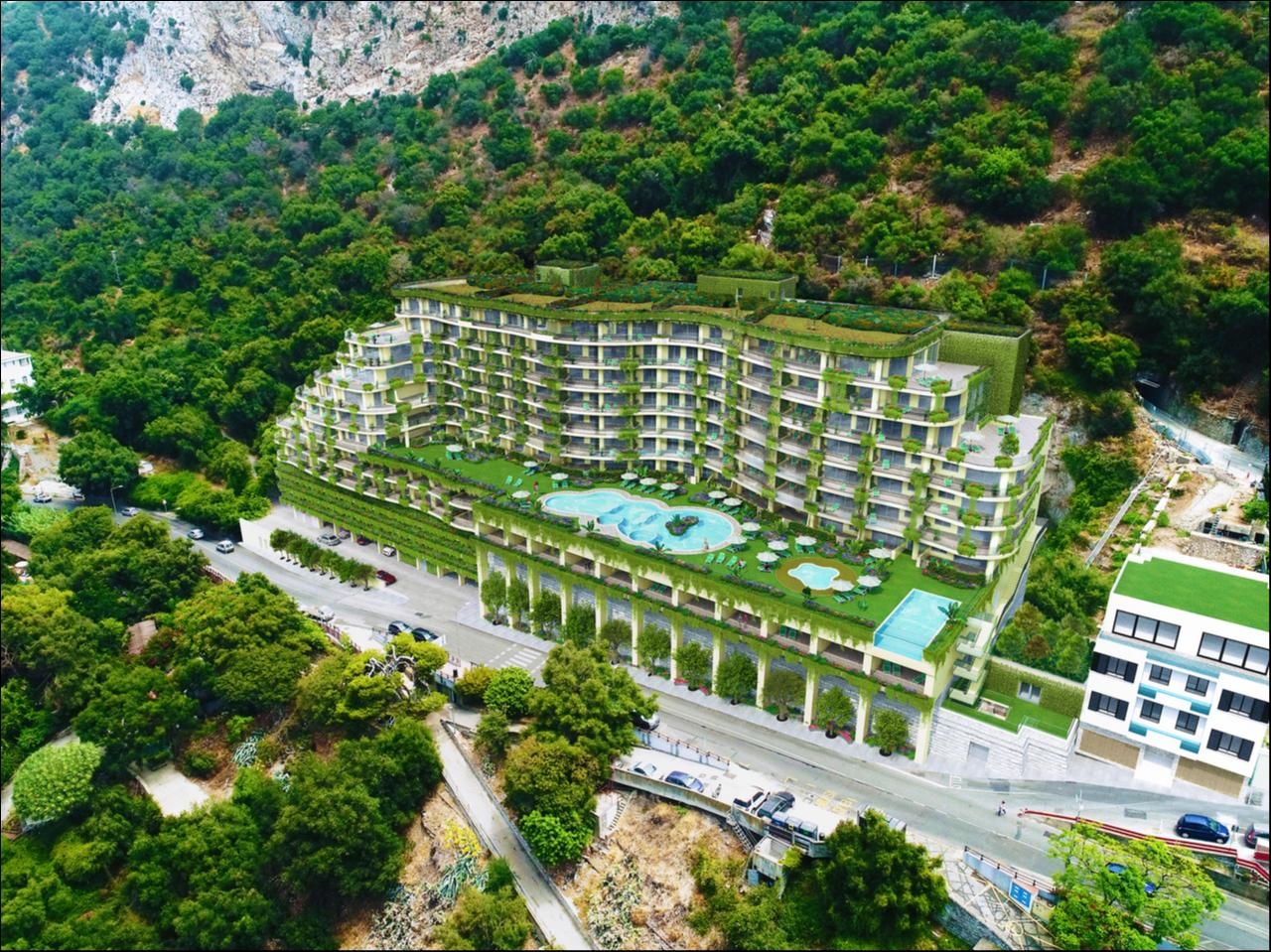 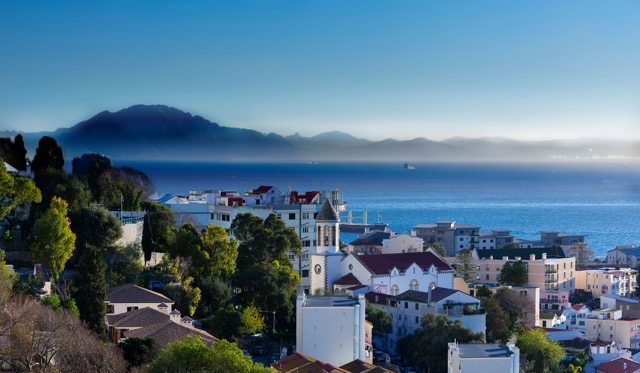 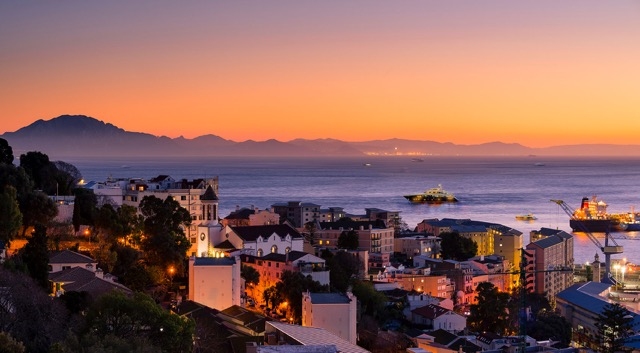 Register your interest before the launch!

Following further additional improvements to its ground-breaking design and appearance, negotiated over a number of Development & Planning Commission (DPC) meetings, planning approval was finally given for the redevelopment of the derelict Old Casino building (which will become ‘The Reserve’) at this morning’s session of the DPC. This was a victory for the preservation of heritage buildings in Gibraltar and will involve the greenest building ever.

The DPC re-examined this ‘Greenest Building Ever’ design because of its unique location, with the Gibraltar Nature Reserve behind and the Alameda Botanic Gardens, in front. This development is situated in a ‘never to be repeated’ setting. The DPC members stressed that they would never allow new building in this location – however, with it being a replacement building, allocated within the Gibraltar Development Plan for residential development in this specific location, it was finally approved based on the extensive consultation that had taken place over a number of DPC Meetings. Therefore, The Reserve is, and will remain, totally unique and never to be repeated.

The Reserve is set to be a unique and pioneering development in Gibraltar when it comes to delivering both aesthetic and sustainable green initiatives, as well as providing amazing views and a unique structural solution which will preserve, protect and futureproof the historic heritage water tanks that sit below the current derelict Old Casino building.

In respect of thinking green, the development will feature an area of the natural habitat at roof level totalling 572sqm, populated with species characteristic of the locality and mitigating any habitat loss. Cascading plants are proposed for the roof and resort deck perimeter and various elevations of the building (such as the car park walls), with the use of species such as the Royal Dewflower (Drosanthemum speciosum), which has proven to be very successful at the recently completed Ocean Spa Plaza and will complement the superlative panoramic views to Morocco and the Bay of Gibraltar.

The East elevation, partly visible from the Gibraltar Nature Reserve is to feature substantial planting areas of Boston Ivy (Parthenocissus tricuspidata), with parts of the South elevation also utilising this beautiful climbing plant in addition to cascading plants, although this elevation will not generally be visible due to it being largely behind the quarried rock face of the site. The North elevation is heavily stepped in order to mitigate visual massing as much as possible and will feature arrangements of cascading plants on each level.

Significant investment is to be made into a custom-designed monorail cradle system to provide a sustainable form of maintenance access for various cascading and climbing plants on the West elevation which are to be fixed onto wires to provide vertical walls of green throughout the development, with species such as Coral Honeysuckle (Lonicera sempervirens), Madagascar Jasmin (Stephanotis floribunda), Lantana (Lantana viburnoides var. kisi), Rosemary (Rosmarinus officinalis), Moonflower (ipomoea alba), Blue Skyflower (Thunbergia Grandiflora), Star Jasmin (Trachelospermum jasminoides) and Black-eyed Susan vine (Thunbergia alata), being used. Internal terrace dividing walls have even been considered within the approved proposals, with climbers including the Chocolate vine (Akebia quinate) and Clematis; The Reserve will literally be the greenest building in Gibraltar.

A total of 46 trees are required to be planted by the developer, representing a 200% increase of trees displaced, with the introduction of trees at ground level on the West elevation and also, following detailed consultation between the developer and the landscape architects responsible for the famous

Bosco Verticale, in Milan, a selection of trees actually being featured on numerous floors of the building, following specific feedback in relation to this, at the August 2019 DPC. Today reference was again made by the DPC to apartments in Bosco Verticale, which currently sell to the jet-setting, super-wealthy in Italy for over £11,000 per square metre.

Another environmental concession required of the developer has been to deliver a sustainable rainwater harvesting solution for the project. The result is that the approved scheme features a completely reworked rainwater harvesting strategy, with a 400% increase in tank volume and the introduction of an innovative system to dechlorinate waste swimming pool water so it irrigates the plants and trees. As such, the entire irrigation requirement for The Reserve will be met on-site, representing a fundamental shift in expectations by the DPC of developers in future developments.

From a heritage perspective, the developer has committed to protect, preserve and future proof the heritage tanks that sit below the site, creating again a unique backstory for future residents of The Reserve. This requires significant investment into innovative and custom-built gargantuan trusses that will bridge the historic tanks so that the structural integrity of them is protected, as well as providing a legally compliant health and safety access system for the management and maintenance of the heritage tanks for the first time.

With the removal of the mock limestone (concrete) bund wall at the Europa Road frontage of the tanks, the original limestone ashlar blockwork of the original tank walls will be revealed for the first time in generations, as well as drastically improving the visibility on Europa Road for road users and pedestrians alike, reducing the chance of accidents in an accident-prone section of road. This will also unlock the creation of a public pavement with flowering plants, trees, seating and a long-awaited pedestrian crossing on Europa Road, in front of the tanks.

The proposals also take into account the long-term future-proofing of the heritage tanks and through the creation of the public pavement on the East side of Europa Road, the option of having an entrance for any future uses that a government of the day might determine, becomes a reality.

Despite the site of the derelict Old Casino being allocated for residential development within the Gibraltar Development Plan, it was widely acknowledged at DPC that The Reserve is a unique development; nestled between the Gibraltar Nature Reserve and the Alameda Gardens with breathtaking views to Africa. DPC members stated that it almost certain that there will not be another development like it. As such, it was entirely appropriate that special and arduous conditions and requirements were imposed on the developer, especially relating to making the building the greenest ever in Gibraltar, in order to approve the proposals and in order to make this development acclimatise to the unique setting it finds itself in.

The majority of interested parties that have been awaiting approval of the development are Gibraltarian families looking to capitalise on the larger apartment layouts, the unique site location, magnificent views and the range of amenities offered.

The development will feature 111 apartments, over 150 car parking spaces (with a bold electric car charging capacity strategy), visitor bays, a resort deck, natural gardens with an array of flowering plants, both outdoor and indoor swimming facilities and a gymnasium for residents.

Work will now commence in close collaboration with the Town Planners, Department of Environment and various other authorities to deliver what will be a trailblazer development that sets a new higher bar for developers, championing sustainability, green initiatives and heritage preservation in Gibraltar.

Suitably named for being at the southernmost tip of Gibraltar, this area benefits from local schooling facilities including the Loreto Convent, the New Gibraltar University and St Joseph’s school, and most places are only a short walk from the beachside resort of Camp Bay and Little Bay which are very popular bathing destinations during the summer months. Most properties can boast truly spectacular views of the strait of Gibraltar and the African coastline.

Due to the focus on residential accommodation in this area, there are limited amenities to offer local residents although this is something you compromise on due to the tranquillity of the area and microclimate. However, there is a large supermarket in the area.